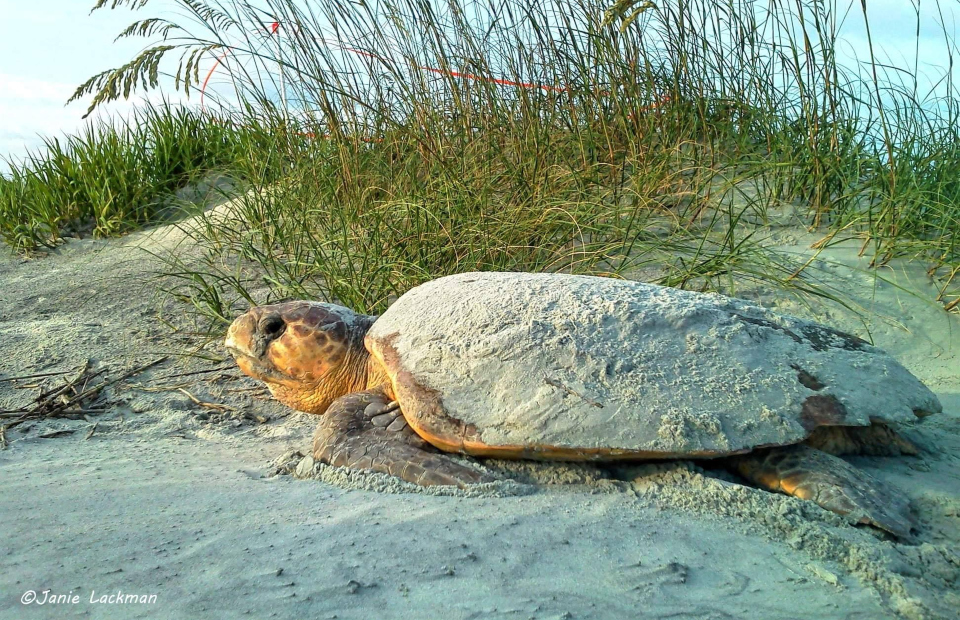 Another sea turtle season has officially started here in Beaufort SC and the sea islands and throughout the months of May, June and July, hundreds of loggerhead sea turtles will be visiting our local beaches to dig their nests and lay their eggs.

Scores of local volunteers will be out combing our beaches every morning to help these little ladies out by marking the nests, helping to keep predators away, and in some cases even digging up and moving the nest to a safer place away from the tides.

To celebrate the new season, which is one of our favorte seasons here in the Lowcountry, we put together a list of facts about sea turtles. Some you may already know, and some may be new to you, helping you to learn more about them.

Loggerhead sea turtles usually lay 100-125 eggs per nest and will nest multiple times, about two weeks apart, over several months during the season. They lay their eggs in a nest that they dig in the sand using their rear flippers.

A hatching sea turtle nest can be quite a sight. All at once, the nest opens up and up to 125 baby "hatchlings" crawl out and immediately, instinctively, make for the ocean. An erupting nest is called a "boil" because it looks like it's "boiling over" with baby turtles.

Unlike other (land) turtles, sea turtles cannot retract their flippers and head into their shells. Their streamlined shells and large flippers make them very graceful swimmers in the open ocean. In the water, their rear flippers are used as rudders, for steering, while their front flippers do most of the work.

Sea turtles breathe air, and are often seen at the water's surface when the come up for air. They have the ability to hold their breath and remain underwater for hours at a time, and even sleep underwater. Most sea turtles spend their entire life at sea, only returning to land to lay their eggs.

Leatherback sea turtles are the largest of all sea turtles, weighing in anywhere between 500 to 1,500 pounds and reaching lengths between 6 to 7 feet long. These giants have been known to swim more than 10,000 miles a year, and have been found to dive deeper than even whales or dolphins. In fact, the deepest recorded dive of a leatherback was nearly 4,000 feet.

Almost all sea turtles will come ashore to lay eggs during the night, sneaking onto the beach under the cover of darkness to dig their nest. The Kemp's ridley is the only one that will nest during the daylight hours.

Leatherback sea turtles look exactly the same today as they did when dinosaurs roamed the Earth. This was found to be true when biologists studied fossilized remains in recent years.

Sea turtles love to eat jellyfish. One of their favorite meals is jellyfish of any kind. They are protected from the venom of even the deadly box jellyfish, and usually enjoy a buffet of cannonball jellies in the early spring.

On average, only one of every one thousand sea turtle hatchlings will survive into adulthood to keep the sea turtle cycle of life moving forward.

About 90% of all sea turtle nesting in the United States takes place on Florida’s beaches, and the other 10% can be found in South Carolina, North Carolina, Georgia, and the Gulf states of Texas, Louisiana, Alabama and Mississippi.

When a turtle comes ashore to lay its eggs, lots of things come into play. If there are people around, the turtle will usually go back into the ocean and wait for another day.

If you want to live in an area where there is lots of seasonal sea turtle activity, we can certainly help you out. If you're thinking of relocating to the Beaufort SC area, we can help make your dream a reality by helping you find your forever home here in the Lowcountry. Call us at 843-521-2121 and one of our experienced agents can assist you in becoming a Beaufort local.

Another sea turtle season has officially started here in Beaufort SC and the sea islands and throughout the months of May, June and July, hundreds of loggerhead sea turtles will be visiting our

What You Can Do to Help Sea Turtles

Sea turtle nesting season is arriving on our local Beaufort SC beaches. From May through October, it's a favorite time of the year for many locals here in the Lowcountry.This is the time of year

Earth Day is coming on Friday, April 22nd, and there are lots of simple, even fun, ways that you can help make a difference and celebrate.Lots of volunteer organizations and the Adopt-A-Highway

Spring in Beaufort means lots of things. Arriving earlier than most of the U.S., spring means warmer weather, daffodils, and azaleas in bloom, and the Lowcountry becomes green again.It also means it